In July, the National Institutes of Health (NIH) and the Prostate Cancer Foundation announced the launch of a large study on aggressive prostate cancer in African-American men, including biological and non-biological factors.

Regarding this study, our Chief Medical Officer, Dr. Michael Geffin, said, "It is great to see a study specifically addressing this underserved and at-risk population for prostate cancer. We know that the outcomes in this group are different, and for a study to better delineate these differences by looking at the genetic and environmental components, it may enlighten us to the cause and therefore allow us more direct and better treatment options."

In addition, earlier this month, European Urology published a study concerning PSA levels and aggressive prostate cancer (PCa) among African-American men. The conclusion printed in the abstract stated: "PSA levels in midlife strongly predicted total and aggressive PCa among black men. PSA levels among controls were similar to those among white controls in prior studies."

Regarding this study, Healthline asked our CEO, Dr. Michael J. Curran, to comment for its article "Early PSA Test for Prostate Cancer Recommended for African-American Men."

Bottom line: Prostate cancer is costing many lives in the African-American community, which is why we must raise awareness since early diagnosis and treatment can help reverse the trend. African-American men should get screened for prostate cancer—and at an earlier age (they should have their first PSA at 40).

Are you in the Boston area? Do you need screening (or does someone you love need screening)? Schedule an appointment with one of our urologists. We have multiple Care Centers throughout the region. 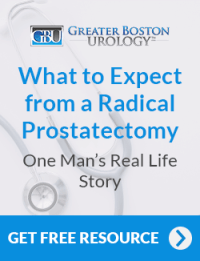 HOW CAN WE HELP YOU?